Ivan-Asen was born in 2014 at the Razgrad Zoo, a zoo in Bulgaria that also functioned as an illegal breeding station. He is the uncle Terez, because his parents are the grandparents of Terez. Ivan-Asen is the result of inbreeding and had a difficult start to life: when we rescued him, he was malnourished, dehydrated, emaciated and very anxious. He arrived at FELIDA Big Cat Sanctuary in March 2018.

Ivan-Asen was born in the Bulgarian Razgrad Zoo but sold to another Bulgarian zoo shortly after. When this zoo discovered that Ivan-Asen had health problems, he was sent back to Razgrad. But Razgrad Zoo had no space for Ivan-Asen, so he languished in a dark, concrete cage full of faeces. He lived a lonely and hopeless life and his condition was getting worse and worse. He hardly saw any daylight, he was malnourished and dehydrated. Since he is the result of inbreeding, he also had problems with his spine and joints. He languished under the most terrible conditions imaginable for the king of beasts.

Thanks to an international petition, national protests and the financial support of our donors, we were able to rescue Ivan-Asen. Our rescue team worked tirelessly through the night on March 26th 2018, and on March 27th he had arrived. The journey was long — through Romania, Hungary, Austria, Germany and finally the Netherlands, to get to FELIDA Big Cat Sanctuary. At the first daylight, he was released into his new enclosure.

This special lion is a good example of an animal that requires highly specialised and intensive care, due to his difficult past and the fact that he is the result of inbreeding. For example, sometimes Ivan-Asen experiences skin problems. Results from veterinarian check-ups showed no bacterial, viral or allergy-related problems. However, it was clear that Ivan-Asen has an ongoing issue with his immune system, which can lead to problems with his skin and other organs: his kidneys have also begun to deteriorate a little. We provide Ivan-Asen with medication to help him with his physical problems and this is currently having a positive outcome. Ivan-Asen will always require intensive care and sadly may have some moments that his immune system will cause him some discomfort. But we are grateful for the many beautiful moments and the fact that he clearly enjoys his life.

Wildlife veterinarian Marc Gölkel from IZW Berlin examined Ivan-Asen as he suffered from a watery eye that did not heal by itself. It turned out that his tear ducts were infected, so our veterinarian rinsed them. In addition to that we saw that Ivan is developing some skin problems again. Blood tests showed us no abnormalities such as viruses. Good news, but at the same time this also means that his returning health issues like his skin problems and watery eyes are all due to his weak immune system, which is a result of his inbreeding background. Despite all intensive and medical care that he receives, his immune system problems cannot be cured. This means that we can expect such health conditions more often in the future. We will of course provide him with all the care he needs to pull through those difficult days. Also, we provided him with an infrared panel in his indoor enclosure, which will give Ivan extra comfort - especially during the winter months - and hopefully will help him with his skin and joint problems.

Fortunately Ivan-Asen is coping fairly well with this loss of Terez. Of course we saw that at first, he was looking and calling for Terez. We gave Ivan some time to get adjusted to this, after which we granted him access to the outdoor enclosure of Terez. In this way, Ivan could explore Terez his smell everywhere. In addition to that, he is now able to be closer to Bobby’s enclosure so these two male lions can ‘experience’ each other from a distance. Of course they know each other’s scent and the sound of each other’s roars, but before they never actually saw each other. Now they can, which is a terrific distraction for Ivan; so many new things to explore! Since normally, Ivan-Asen does not walk a lot due to his neurological problems, and the space he now has at his disposal is quite big for him, he is occupied the entire day and ready for a long sleep afterwards. We are happy that in this way, we can really help him through this phase. 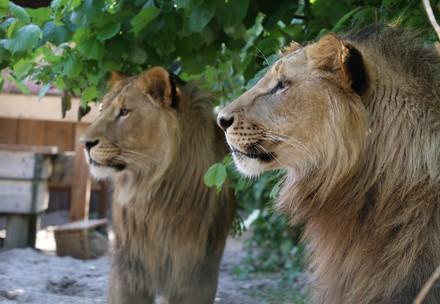 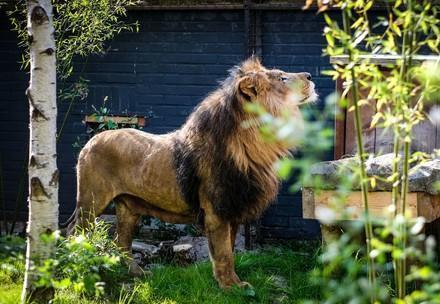 Read here our press releases, success stories, blogs and more and check out some amazing picture and video galleries of our animals!