The triplets Rafik, Mirza and Zita were born in the Netherlands in 2009 and are the offspring of tigers Cromwell and Juno and younger siblings of tiger Raspoetin. The funny trio lives in LIONSROCK Big Cat Sanctuary since 2015.

Playing in the swimming pool in LIONSROCK Big Cat Sanctuary

Tigers Cromwell and Juno were born in 2000 in a zoo in Great Britain and two years later they were brought to Nijeberkoop, the Netherlands, where they had two litters: one in 2004 and one in 2009. The second litter consisted of the triplets Rafik (male), Mirza (male) and Zita (female). We met the triplets and the rest of their family at the end of 2013, right before FOUR PAWS took over the rescue centre and named it FELIDA Big Cat Sanctuary. In 2015 they moved to LIONSROCK together with Cromwell, Juno and Raspoetin.

Roles in the group

The three tigers live and always have lived together and this works out very well. They have divided the roles in their group: Rafik is the boss. Mirza and Zita are the most playful ones and they love playing with each other and with enrichment. In addition to that Zita, as the only girl in the group, knows very well how to tease and 'annoy' her brothers. Yet she also is fully aware that physically she cannot compete with them, so she teases them and then runs away quickly before they can catch her!

The three tigers are like real siblings and therefore can have a 'catfight'. Rafik is the bossiest sibling and during feeding times he sometimes tries to claim the food of his brother and sister. Mirza is smart and relaxed: he takes his food far away from Rafik and finishes his dinner in one of the little houses. When it happens that Rafik manages to claim his food, he lets it go in order to prevent a fight. Zita is different: she gets angry when Rafik tries to steal her food and therefore, she now is taken away to feed separately from her brothers when it is feeding time. Apart from this moment, Rafik, Mirza and Zita live together peacefully and enjoy their lives in a species-appropriate home to the fullest. 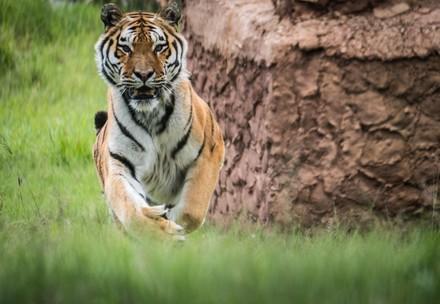 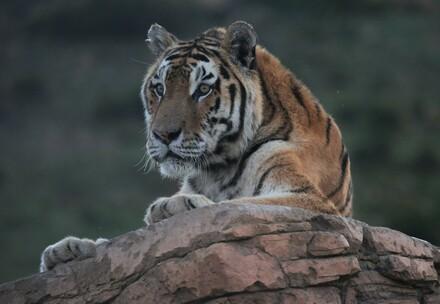 It was a matter of life and death and the odds were 50/50 for the 18-year-old tiger Tomi, who was rescued by tiger Mirza